An inspiring story, I have know Steve Muse for a few years now, I met him and Jennifer as a volunteer and photographer at Challenged America, I did not know the whole story until now, just bits and pieces.

When I was in the hospital a year and a half ago with the real possibility of losing my leg, Steve Muse and other Challenged America participants, Wounded Warriors were the inspiration that helped me keep positive during my stay, through my surgeries and year long recovery.

Steve loaned me one of his wheelchairs, set it up for me and gave me a form of mobility I did not have and I gained a whole new level of admiration for what he had and was achieving and gave me the strength to push my rehabilitation through the pain, through the ups and down.

Watch his story and if you are not inspired, nothing will.

Thanks Steve for everything, you will never know how big a part you played in my recovery, you are an inspiration..

The son of a salesman and bookkeeper, Eric Brand was born in Tarzana, a suburb of the San Fernando Valley located to the northwest of Los Angeles.  As a teen, he attended Taft High School in neighboring Woodland Hills. Reaching college age Eric matriculated to Cal State University Northridge where he studied a varied of subjects unsure, at the time, of what discipline would pique his interest.  Being a sports enthusiast, however, he did play volleyball.  But like many, Eric always wanted to venture south to surf on San Diego’s pristine beaches, a dream which reached fruition when he came to study in our local colleges.

After arriving in the sunny southland in 1981, Eric attended SDSU. During his sojourn as an undergrad, he took a year to head farther south, where he attended two semesters of classes in Guadalajara, Mexico. There, Eric focused on improving his Spanish fluency.  He then backtracked north, to the land of the gringo, where he worked a year clerking for Michael Dodge, a local bankruptcy attorney.  Having found that the study of law was the subject that stoked Eric’s fires, it was in 1986 that he set his sights on Pepperdine Law School in the sage covered mountains overlooking Malibu.  After graduating from Pepperdine, the new graduate remained local for his first real job, a deputy public defender for the County of Los Angeles.

As 1994 dawned, Eric once again set his sights on a return to America’s Finest City.  Transferring to San Diego as an alternate public defender he was again jazzed to settle in the land of sun and surf.  It was at that time that mild symptoms of a disabling disease began to molest Eric. It was just before his transfer in 1994 that he went to seek medical aid, curious as to what was causing his nascent symptoms. Soon thereafter, he was diagnosed with Multiple Sclerosis.  END_OF_DOCUMENT_TOKEN_TO_BE_REPLACED

Born to a San Diego family, Ryan Porteous was fortunate to grow up in the coastal community of Pacific Beach in a time when P.B. was booming.  His father an environmental consultant and mom a grade school science teacher, Ryan was oriented toward getting an advanced education from an early age.  Beginning at Mission Bay High School, after graduation Ryan matriculated to UC Santa Barbara.

Ryan was introduced to water sports at a young age, firmly rooting his destiny in boating. At Mission Bay Yacht Club, he attended the Junior Summer Sailing Program from age seven to ten. It was there at MBYC that Ryan learned to sail and then eventually race.  “I started out in sabots, progressing from C3 to A fleet, then on to 420s, lasers, and other sailboats, racing at junior regattas and other types of fleet racing.”  Being the ace that he has become Ryan humbly explains, “I have won multiple local regattas in these boats and done well in national regattas, as well.”  Some notable achievements were winning the 2007 Mark Reynolds Perpetual Trophy in the 420 class, and placing third then second in the 2008, then 2009 ISAF (International Sailing Federation) Youth World Qualifiers in Multihulls.

Things were going well for Ryan when he headed off on a camping trip in October of 2011.  Regrettably, while walking on a dock he slipped and changed his life forever.  “I have a C-6 spinal cord injury which caused almost total paralysis.  I broke my neck in a freak accident in which I slipped and fell to the ground, clipping my head on the end of the dock.  I lost control of my body from the neck down.” END_OF_DOCUMENT_TOKEN_TO_BE_REPLACED 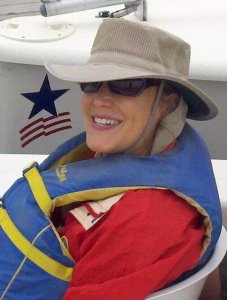 The daughter of a Marine aviator who became a commercial pilot and a civilian nurse who became a stay at home mom, Amelia shared her life with two brothers and a sister. Like most in the military, Amelia’s family moved around a great deal during her formative years.  At age 10, the family finally settled in Fallbrook where Amelia attended elementary, middle and high school.

In 1978, four days before her 15th birthday, Amelia was a passenger in a vehicle that went out of control at high-speed, rolled over, and left her severely injured.  While once athletically gifted, with a broken back, and several broken ribs, she was told, “You will never walk again.”   With two dysfunctional lower extremities, Amelia was no longer able to participate in her favorite sports activities and the fledgling sporting and recreation programs for the disabled in the early eighties were insufficient.  Fortunately, those programs, including Challenged America, have progressed dramatically since that time.

She was among the first few students to attend Fallbrook High School in a wheelchair.  Although paralyzed from the underarms down, nearly from the day Amelia was injured, she was determined to get back on her feet.  In a wheelchair for everyday activities, Amelia underwent years of physical therapy and, being the fighter she is, progressed from using parallel bars to a walker and then to forearm crutches, which she uses today. Fighting an uphill battle, it was a distant two-and-a-half years when she was finally able to give up daily wheelchair use. END_OF_DOCUMENT_TOKEN_TO_BE_REPLACED

Help keep our program free for children, adults and veterans with disabilities with your tax deductible donations